I give this a 4 star rating because I think the recipe needs a slight adjustment. First off, there was too much milk for the amount of egg. I ended up adding 2 more eggs to even it out. I don't think it needed the sugar as to me syrup is plenty of sugar. I did however end up adding 1 TBS of the sugar just for the sake of the recipe and that was plenty (although, I'm not someone who likes overly sweet stuff). It would be find without the sugar altogether. I did, however, LOVE the idea of cooking the french toast in the waffle iron!! I thought that was the neatest idea and it made it a bit fun to eat as well. The only complaint I had was that the crust tended to get very tough and chewy. I would suggest cutting off the very outer of the crust before cooking it. Although, that might have had something to do with the fact that I used wheat bread instead of white. Either way, I did enjoy the recipe and will definitely be making it again. :) 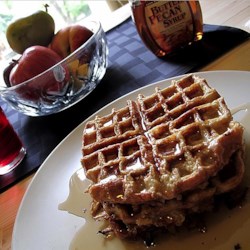