Hi there! I'm not a big fan of banana bread, but we had three or four bananas wasting away in the pantry so I decided to give this bread a shot. I replaced all the eggs with EggBeaters, used whole wheat flour instead of white, instead of 2/3 the butter I used apple sauce, and added cinnamon, nutmeg, and cinnamon chips. I also sprinkled the top with a bit more brouwn sugar. I had no problem with it rising, and it cooked very nicely and actually a bit quicker than the recipe said! The color was gorgeous and the cinnamon chips made wonderful little cinnamony gooey spots in the bread. It was quite moist, too. I wasn't blown away by it, but then again I don't really like banana bread (prefer pumpkin bread, mmmmm!!!!!!!), but my mom said it was the best banana bread she's ever had and took some with her to work and everyone loved it! It was also very easy to make, so I'll probably make it again it we ever have ooky bananas. I also recommend that you replace some of the ingredients like I did because it makes it a lot healthier. Enjoy!!! 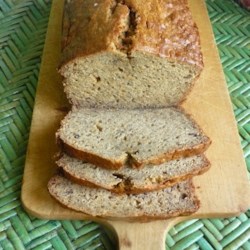