I was in a hurry and didn't read all the reviews, but I naturally did what they suggested and made only half of the dressing and I used canola oil instead of olive oil because I wanted the taste to be lighter. I also modified it with what I had in my fridge, so I used an apple, candied pecans and blue cheese. It was still a hit and the maple dressing really adds a lot to the taste! Great way to have a low-carb and gluten free appetizer! 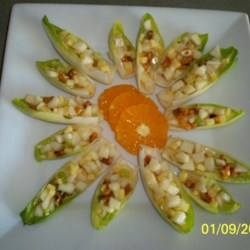