As is, the recipe is okay, but the chai flavor is very very subtle. The second time around, I made the following changes: upped the cocoa powder to 1/3 cup, the vanilla to a full teaspoon, added one egg for improved texture, used half white and half packed brown sugar, added 1/2 cup chocolate chips, and used "chai butter" instead of oil. To make that, I simply simmered butter with a teaspoon of chai tea leaves for about 5 minutes, then strained. If you want to keep the recipe vegan, you can infuse the canola oil with chai as well, and omit the egg I added. Make sure the chai tea is brewed very strongly -- I poured 1 cup boiling water over three tea bags and steeped for 20 minutes. The chai flavor was more pronounced but not overpowering. Next time I might add some extra ground cinnamon, nutmeg, and cloves for a spicier brownie. 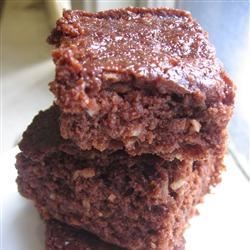