FANTASTIC!!! A few important things to note: check your ice cream maker as this recipe makes a lot of ice cream. I cut the recipe in half and it was still too much for our maker. I made the mix in a pitcher and just poured the appropriate amount in the mixer, leaving the rest in the pitcher to make another small batch later. Second, I used 2/3 heavy cream and 1/3 2% milk. Other reviewers mentioned they had ice crystals, but I did not have that problem. Right out of the ice cream maker, it was a bit like soft serve so I put the canister in the freezer for a few hours and wound up with some amazingly creamy and delicious ice cream! I also threw a small handful of chocolate chips in during the last 5 minutes of mixing, but I think miniature chips would be better. This is now my go-to vanilla ice cream recipe! YUMMY!!! 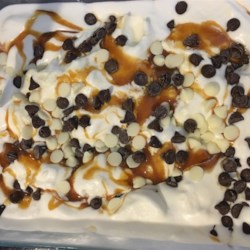