This was a great recipe! It was a hit at a family picnic I made it for. I was able to get 25 penguins out of a can of jumbo olives. For the beaks, I had to cut a horizontal slit into the smaller olives, and I sliced the beaks thinner so they would fit better. I made these the night before and was worried they would get dried out, so I stood them up in a tupperware container and placed a small amount of water in the bottom and sealed the top. They were fine the next day. They took about an hour to make. I needed to transport them safely on a two-hour car ride so I used the top and bottom of an egg carton and leaned the penguins on their backs in each section of the egg carton, which worked great and prevented them from shifting and getting stuck together. I used an herbed cream cheese spread which worked well. A couple people thought they were chocolate covered treats so you may want to tell people they're olives! I'll definitely make these again! 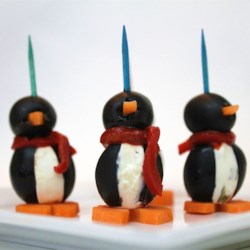