Pretty decent BBQ sauce. I used the Dr. Pepper substitution as I thought the cinnamon flavor would be a nice addition. I also substituted apple juice for orange juice out of necessity. After mixing this together, I thought it was terrible, but after cooking, the flavor profile really came around. I ultimately added in about 1/2 cup of brown sugar because I wanted it a little sweeter. I also thickened it a bit with corn starch. 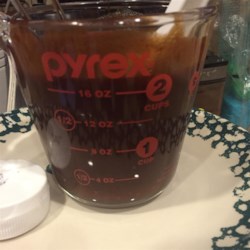