I was very eager to try this recipe as this is one of my favorite dishes at a local Thai restaraunt. This salad was not as spicy as the one I was trying to achieve and far too sweet, however it was much better when I cut the sugar in half and added some diced thai peppers to the marinade. I like it served over rice instead of lettuce. One thing about the recipe was misleading and that is the time involved. The recipe talks about preparation and cooking time but fails to mention the three hours needed to marinate the steak. Unfortunately, I just glanced over the recipe the first time I made it and didn't allow enough time. I really think that if a recipe requires time to marinate that should be in the heading area with preparation and cooking time. 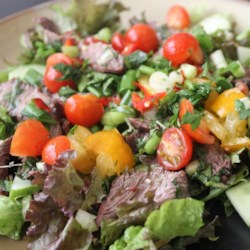