I made this recipe following the exact instructions, but the next time, I might add all the water at the same time (or at least more than 1/2) because the dough was a little dense (not very soft or pliable) and difficult to roll out. I tried rolling it out to be almost paper thin and was able to accomplish 1/16th of an inch for most if it, and was glad I did because one of the previous revieiwers was right when she said it can get pretty difficult to eat when thick. As it was, it was perfect. As for the fillings, I tried 1)ham and cheese 2)blue cheese dressing, chicken, and hot sauce 3) pepperoni and cheese. What i learned is that for this dough, the wetter the filling, the better the end result. My ham and pepperoni rolls were quite dry while my buffalo chicken roll was perfect - the tons of blue cheese dressing prevented drying out of the dough in the oven. As for the baking temperatures and times: I tried some strudels at 425 - not a good idea. The best seemed to be the ones at 350 for about 15-20 minutes - also, be sure to not let the strudels get too brown if you roll your dough out very thinly. A slight golden color is plenty. 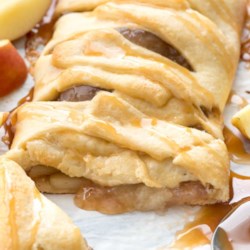