I doubled the amount of meat but left the sauce amount the same. I used reduced-sodium soy sauce and think next time I'll reduce the amount of soy sauce slightly since it seemed a bit overwhelming taste-wise and left an aftertaste. Followed another reviewer's suggestion to cook 2 hrs. and then add the onion and green onion and cook an additional 2 hrs. and this worked well. I also skipped the pre-browning in a skillet - since the steak is cooked in a very dark brown sauce, no one could tell that it wasn't pre-browned in a skillet. One less pan to wash! 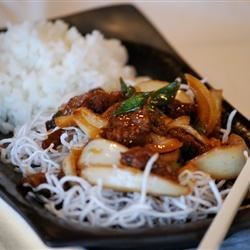