These treats have been made in our family for 4 generations with a little variation from the recipe stated that might deal with some of those that were not wowed by what we have always called "cinnamon sticks". Our recipe calls for 1 1/2 softened sticks of butter/margarine and only 2 teaspoons of ground cinnamon. We never added the vanilla extract but I will give it a try on the next batch. Nor did we top with the confectioner's sugar. What I always found the secret to be was to really work by hand the prepared dough until it is very moist all the way through. I would then roll it out on the well-greased cookie sheet. Yes, it will be very thin but as you press in the pecan pieces it rises up a little bit. Watch them closely turning your pan half-way through the cooking time to get an even browning. They can go from golden brown to well done very quickly so don't overcook. Slice them into rectangles while hot in the pan and then remove with a spatula and let them cool on wax paper. 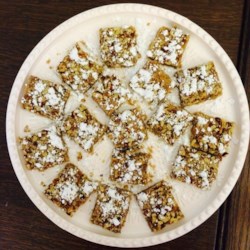