The first time I made this, I followed the recipe exactly. When finished, I tasted a hint of jalapeno, a lot of sweet, and it had the strong smell/taste of cider vinegar. Not to give up easily, thinking this should have more of a savory taste, even though it is jelly, I made the following adjustments. I used white wine vinegar. I sweated a coarsely chopped white onion and 6 cloves of garlic until they were sweet and translucent. I added a seasoning bag containing 1 tsp mustard seed, 1 tsp crushed red pepper, 1 tbsp pickling spice, and 1 tbsp whole peppercorns and the vinegar, being careful to make exactly 2 cups. I added 1 cup of water. I added the red and green pepper, and jalapeno (leaving some of the seeds for heat) and simmered for 30 minutes until the peppers were "cooked". At this point I removed the spice bag. I added the sugar and continued to simmer mixture until all the sugar was dissolved. I brought the mixture to a rolling boil for one full minute, added the pectin, and stirred until all the pectin was dissolved, another 2-3 minutes. I shut off the heat, let sit for 2-3 minutes, then filled my sterilized jars. I processed the filled jars in a hot water bath for 30 minutes to remove any remaining air from the jars. Upon removing the jars from the simmering water, they promptly sealed themselves within 30 minutes. On tasting this further revised recpie with the savory additions, the added texture is a real winner. Try it; you'll like it!! 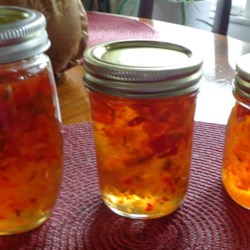