We liked this very much, even the husband, who isn't very fond of vegetables in general and NEW ways of serving vegetables in particular. (He actually could not I.D. the blueberries at first--he was pushing them off to the side until I asked him about it--thought they were black olives!). I did make a few changes based on necessity. *Resized the recipe to 10 so that I could use up 1 entire bag of romaine (which if you're curious, yields 8 cups of lettuce if you dont squish it down). *Used dried mixed berries instead of just dried cranberries. *Used less blueberries than called for and extra dried berries--this was a choice based on price, because I used fresh. I think I COULD have bought frozen blueberries, thawed & drained them though, because I don't really care if they stain my salad blue. *Used all low-fat feta & no goat cheese. None of the above changes make any real difference overall. Except maybe the feta or sunflower seeds--you need one or both of those to cut the sweetness. The real changes I made were in the dressing. *Used RED balsamic vinegar instead of WHITE because it's what I had. *Used pancake syrup instead of real maple because it's what I had. *Used olive oil instead of grapeseed oil because I couldn't find it at the grocery store. ~It was still tasty even with these substitutions. I mixed my dressing separately from my salad because the salad gets re-bagged and eaten all week and you can't do that with dressing all over it. 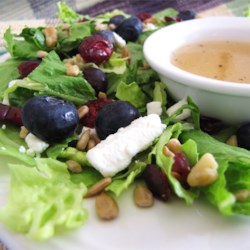