WOW! I made this two times - once exactly according to recipe, and second with a few alterations. The recipe version was fantastic, and I did not think it was too sweet. It was very rich, and I thought there was a strong cool whip flavor, and not enough chocolate. Nonetheless, it was delicious and everyone agreed. The second time I followed some suggestions here, and the dessert won me first place in a contest this weekend! I mixed the pudding and water, and in a separate bowl whipped 1/2 pint heavy cream and 3 tbsp sugar, then folded in the cream with the pudding/water. I also did use the french vanilla cool whip in place of the plain (12 oz). So, I layered brownies, caramel, heath toffee bits, chocolate whipped cream, and french vanilla cool whip. Repeat! It was PHENOMENAL. I had so many requests for the recipe, and I saw numerous people going back for 2nds and 3rds. It was a major hit, and will be a staple dessert dish for me! Thank you!! 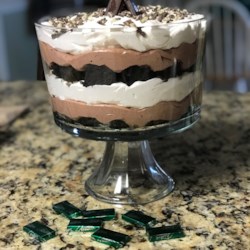