Absolutely the best dessert! I'll be making this again and again. I used frozen blueberries, frozen pie crusts, omitted the pecans, and upped the flour/sugar to make up for the missing nuts. Amazing! I didn't even dirty my mixer, just mixed by hand. Can I say more? My new favorite! UPDATE: I used a crust made of 6 oz cream cheese, 1 c. butter and 2 cups flour. Chill at least an hour or up to a week. Roll dough fairly thick and place in pan. Trim edge leaving an inch or so around. Fold under and flute edge so it stands up a bit to hold more filling. I doubled the filling and most of it fit. I baked the rest in a custard cup, lined with trimmed pie crust. The pie took quite a long time to bake - I'm guessing over an hour. Bake until the center is set, then top with crumble. The crumble seemed like it had too much butter, so I added about 2 T. more each of flour, sugar and pecans. Bake until browned - using the broiler if needed. The crust baked up nice and crisp. 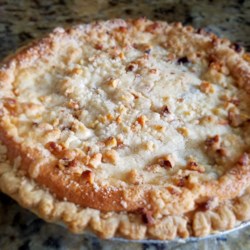