This is a great recipe, no doubt. There are a few points that should be emphasized. First, the instructions state that the mixture should be cooled before assembly. This should be in capital letters. There's something about letting the mixture set-up somewhat to reduce the amount of moisture...that thing that everyone is saying to avoid. Excess moisture kills this dish. I spun my spinach dry before chopping it and adding it to the pan, but go to great lenghts to introduce as little extra moisture as possible. On the subject of spinach, I think the recipe implies the dirty bunch-spinach, not the pre-washed baby spinach. I found I lost about 1/3 weight from the bunch spinach after discarding the undesirables and destemming. Baby spinach is more expensive, but you can take it right out of the container, chop it and throw it in the pan. If you use bunch spinach, account for the extra time it'll take you to clean and destem the stuff...huge PITA, but much cheaper. Also, you can't go wrong with extra phyllo. I wouldn't layer it in the middle, because it'll just be a doughy mess between the layers of filling. But to have eight sheets on the top AND bottom would not do you wrong. Finally, I found this dish rocks coming out of the freezer and going right into the oven. Prepare it the same just to the point it goes in the oven. Take the whole frozen kit and caboodle right to the oven, add some extra cooking time (20-30 mins) and it turns out identical. 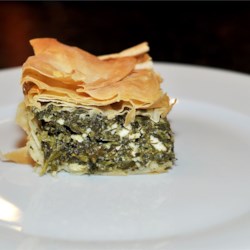