Good thing there were some reviews, though I didn't read all right away until the broiler started smoking and the shrooms started burning. I moved the oven rack down even farther - about 8" and switched from Broiler High to Broiler Low before my husband had to fan the smoke alarm to keep it from going off. I think the idea for this recipe is good, but (1) way too salty with so much soy per shroom, (2) the sesame oil did seem to smoke quite a bit, had I not caught it in time it would have been disastrous, (3) would have been nice to have the instructions a little more informational about broiler temp. The plating looked great, but it was just way too salty as written. 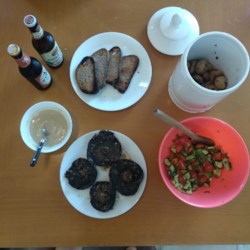