I actually have to say that I did not like this recipe. I am a competent cook and I followed the instructions exactly, except for one thing: I didn't cut out the jackolantern faces. I've made other stuffed bell pepper recipes before and they always turned out fine, so I didn't think that cutting out the faces served any functional purpose, merely decorative. However, in retrospect, I may have been mistaken- this was very, very juicy, and before I served the peppers, I actually grabbed them with tongs and tipped them over to drain out all the excess fluids from the ground beef. That being said, I think if I had cut the faces (or at least cut tiny vents), it may have drained on its own... but either way, that was not my issue with this recipe. I think that, as written, it contains too much mustard! I used exactly the amount specified and it overpowered everything else... it tasted just like mustard ground beef, no other flavors. If I made it again, I would reduce the mustard to 2 tbs, 3 max, and also I would saute the onions with the garlic before adding them... otherwise they are still crunchy and spicy after cooking for an hour. Finally, I think I would nix the bread cubes and add a cup of italian bread crumbs instead, and perhaps some freshly chopped parsley. The recipe was lacking flavor or spice- all it tasted like was mustard. One thing I do have to say though is that the cook time and temperature were spot on- it was perfectly done. Just my input. 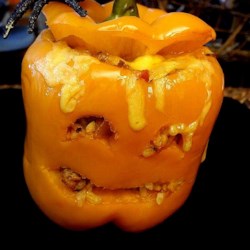