Pretty good. I, too, used cinnamon rolls as I had a tube to use up in the fridge. I originally planned on this recipe to use up applesauce as well (using applesauce instead of apple butter), but I didn't have enough applesauce for this recipe, so I used pumpkin butter. It's very good but almost sickeningly sweet. I guess that's not too surprising, as there is a lot of sugar in the sauce, but I wonder if eliminating the apple butter (or pumpking butter) makes it less sweet and more palatable. Either way, I'd do less sugar next time. I had to bake these a little longer--maybe because of the cinnamon rolls. I made a half recipe. thanks for the recipe! 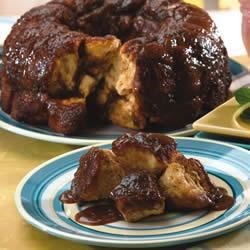