I think this is a wonderful quality recipe. I tried to do a water bath, but didn't have any pans big enough, so I just put another pan of water in the oven to steam during cooking...it worked! No cracks at all! :) I did have some people say it was a little too sweet or too rich for their liking, but after the fact I noticed that I'd accidentally used the King Size 2.8 oz. toffee bars instead of 1.4 oz., essentially DOUBLING the amount of candy bar the recipe called for--oops! For someone like me who likes things very sweet and decadent, it was perfect, but I just want to warn everyone else to pay better attention to the actual size of candy you're buying as opposed to just the number of bars. A suggestion I was given was to do a layer of just plain cheesecake mixture (before adding the crushed toffee bar bits), and then having the richer toffee-cheesecake blend on top of that...but that could have been because my mistake made the cake richer than that particular person would have liked. No matter what, I thought it was wonderful, so it's a 5 star recipe for me! Also, after making it and refrigerating for a few hours, I opened up the springform pan to make sure nothing had stuck (it hadn't), tightened it again and covered tightly with foil...I left it in the freezer for 4 days before thawing in the fridge the day before serving. I don't think ANYONE would've known that it wasn't freshly made...very impressive. Thanks for sharing a great recipe! :) 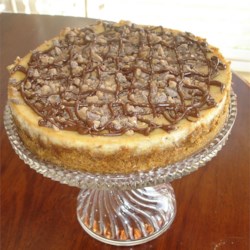