The first couple of times I made this I followed the directions exactly and put the pudding layer on the still warm caramel layer. I figured it might be the heat that was making the top section runny. I made two adjustments that has solved the watery pie problem. In preparing the chocolate mixture I blend everything but the sour cream. I fold in the sour cream after the rest is blended. Afterwards what I did was put the pie crust with just the caramel layer in the fridge on it's own, and put the cream cheese chocolate pudding layer in the fridge in a separate container to set. Once they had ample time to cool and set I put them together. It works well and tastes amazing. 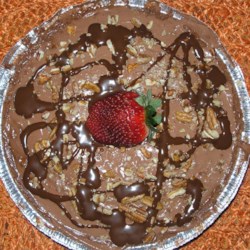