This did not turn out well at all. Maybe I did something wrong? It just turned out to be a giant mess. First, I used a 9-inch pie plate but I don't see how anyone could fit a QUART of ice cream into a 9-inch pie plate (unless maybe it was a deep dish?) The crust was easy to make - and the only part of the pie that I really liked, it was delicious. I used Nabisco Famous Chocolate Wafers (crushed). As for the rest, once I added the strawberries (used fresh not frozen) the "softened" ice cream started overflowing the pie crust so I didn't add the second layer of ice cream. Just topped the strawberries with the whipped cream (which really needed some vanilla added) and then froze it. The ice cream was overflowing so bad that I had to place the pie on a plate in the freezer to catch the spillover. After letting it thaw for a few minutes before slicing, it was still hard to cut into and I did not at all like the taste of the frozen strawberries. I would try this crust again but maybe just filled with fresh strawberries (chopped & with sugar sprinkled over them to bring out their juices) and then topped with whipped cream (heavy whipping cream with 2 TBSP powdered sugar and 1 tsp vanilla). 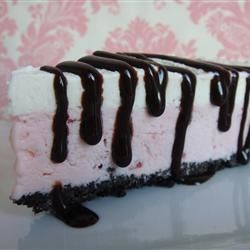