This was pretty good. I used a regular store bought pie shell and used only 1 1/2 cups cream, but it was still too much and I had to throw out some of the mixture. I would suggest using only 1 cup cream, because after cooking for an extra 15 minutes it was still very softish. I sauted my onions in my bacon grease, because they are better put in cooked than raw. Other than that I followed the recipe. Definately let it cool for 10 minutes or longer before cutting it. 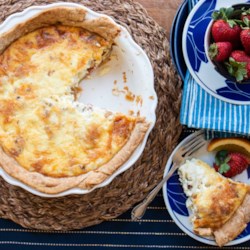