I made this for a birthday party. It was an absolute hit. I made a lot of variations though. Instead of the devil's food, I used the German chocolate mix.(i had that at home). The cake tasters are also all trying to lose wt or maintain lost weight- i substituted the cool whip for fat free cool whip, sugar free pudding and used applesauce and egg whites in the cake itself. It was just awesome though! Everyone ate tons n tons of it w/out feeling guilty. 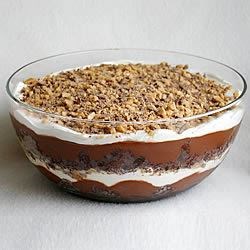