I'm a novice cake decorator and this is the first time I've ever in my life reviewed a recipe, but I was so overjoyed I had to do it. I have been trying buttercream recipes for 4 months now, and it's been horrible. I wanted something that did not include the nasty shortening, and was easy to make. I didn't have any luck with any meringue buttercreams either, which just tasted like a big block of butter and requires refrigeration, re-whipping, etc. I was THRILLED to find this recipe! First I made the initial recipe as written, which was a small batch. Then I quadrupled the recipe to make 32 servings to frost/decorate a 9 x 13 layer cake. I found that it's EXTREMELY important to cream the softened butter for several minutes first, then I added the confectioners sugar (after sifting it first) a cup at a time until combined. Then added clear vanilla extract, and for the 4x recipe I only used 1 Tbsp skim milk. Then really important: continue to beat for another 4 minutes! Came out SO fluffy and light and snow white colored. Extremely easy to frost and pipe decorations. Got a nice crust as well. I had several "foodies" taste it and they gave it 2 thumbs up as well. THANK YOU!!!!! 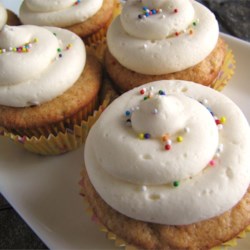