I did a double batch with an extra # of tomatoes with the hopes of 7 pints, I got 6. I like the flavor, but could have used more precise instructions as a "noob". (This is my first time canning anything other than dilly beans) I simmered for at least two hours. Apparently, that was not enough as it is still too thin. I thought maybe it would thicken up, but it hasn't. (I guess that makes sense, nothing really in it to thicken, but just want to pass that on, in case someone else thinks the same thing) I took it off the burner b/c it looked like all the tomatoes were cooked pretty much to nothing, and I had the impression that it would stay chunky, it did not. Also, I wasn't sure if I was supposed to just slice up a whole lemon or peel it. I kept it whole. I used one lemon for the whole double batch and I think that was more than enough, I can taste it clearly. Overall, I liked it and will make it again, except for boiling it down a lot more. 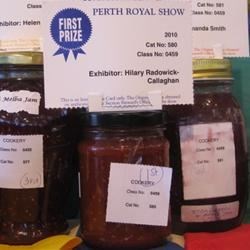