I got rave reviews on this cake ("you should sell this for $8.00 a slice"), but I did mess with the recipe. First, I scaled the recipe to 12 servings because of the comments about how huge the cake was. I used 2 9" baking pans and it made a pretty regular sized cake. I used about 4 cups grated carrots, which was all of the carrots in the bag I bought and 1/2 cup less than called for. I replaced half of the oil with apple sauce and I replaced half of the pineapple with apple sauce. I also used wheat flour for a little less than 1/2 of the flour. I left out the raisins and I added about a tsp each of nutmeg, allspice, ginger and dried orange rind. I also doubled the cinnamon. For the frosting I used 1/4 lb butter, 8 oz cream cheese, 2 tsp vanilla and 1 lb sifted conf sugar. Should probably have refrigerated it to let it set more before I transported it because it got a little slippy but not disastrous. I took it to a 4 person dinner party and brought leftovers to work. People could not get enough. I was pretty happy since I not only never made carrot cake before, I had never eaten it so I wasn't sure how it should taste! Thanks! 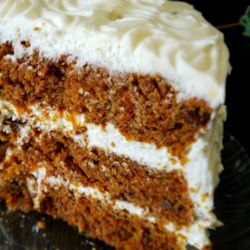