This was the first time I'd ever attempted smoked pork spareribs. I followed this recipe precisely and the result was unanimous acclaim from all of my dinner guests that these were the absolute best ribs they'd ever had! There was one minor change, since we were unable to start dinner on time. I took the ribs off the grill and put them into a Pyrex baking dish, covering them tightly in aluminum foil. I then wrapped this in a triple layer of beach towels until we were ready to serve 30 minutes later. Not only were they still warm, but incredibly juicy as well. I plan to do it this way next time. 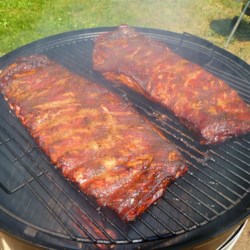