First off I want to say I messed up in the dough when it came to adding the sugar- I should have added 1/2 cup but only did 1/4 cup. So I tried to make up with it when I did the feeling by doubling the sugar&cinnamon (which was GREAT) it made it gooey like a cinnamon roll. I would also cook it at a lower temp because mine was golden but somewhat doughy still. And I didn't use the frosting because all I could tast was the powdered sugar. Otherwise I think it was easy and still good!Next time I will just modify it and probably do a light glaze on top. 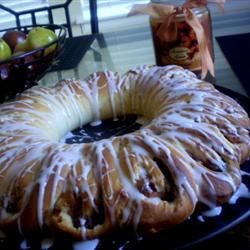