Please don't count this recipe out based on the comments from some reviewers: This can be a 5 star recipe with a little tweaking, I promise! Per the suggestion from some other reviewers, I used 3 large over-ripe bananas and increased my peanut butter to 3/4 cup. I took the flour down to 1 3/4 cups, and added 2 teaspoons of vanilla. My own little ideas were to add 2 Tablespoons of brown sugar to the white sugar (still keeping white sugar amount the same), and also adding 1/2 cup unsweetened applesauce to the butter mixture (without taking down the amount of butter). I don't know if these changes are why my muffins are so much more moist than many reviewers said theirs were, but whatever I did worked!!! I also added a teaspoon of imitation banana extract, as some people thought the peanut butter overpowered the banana flavor. Also, I left out the walnuts, since I was making them for children and didn't know if they'd like the nuts. I baked them as muffins for 25 minutes and they turned out absolutely perfect!!! After doubling this recipe I ended up with exactly 41 large muffins, so not quite two dozen if the recipe had been made exactly as written (unless you wanted to make small muffins). I would recommend this recipe to anyone, using the modifications I suggested. Thanks!!!!! 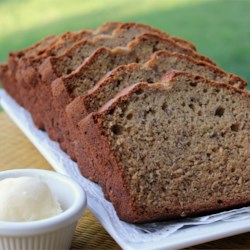