I made this twice. The first time I used an iron skillet and hubby cooked sausage on grill. I sauted onions and garlic in pan. Then added red cooking wine and beef broth and let it boil for a while. Then, I added the sausage and let it cook a little longer. Then I put in crock pot and put in seasonings and tomato sauce. I left out the tomatoes. I let it cook for a couple hours more. Kids loved it. It got left out overnight and I had to throw it out. :( Second batch I used chicken broth and cooked the sausage in the skillet. I put it in the crock pot again with the sauted veggies and instead of tomato sauce I just added a whole jar of spaghetti sauce! I left it thin enough to be a soup and the seasoning were enough to keep it tasting great. The second batch was a little oilier because of the cooking the sausage inside in a skillet rather than the grill. I think the flavor of sausage was better the first time, but the spaghetti sauce worked great. Then second batch I 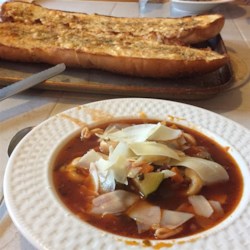