I'm kind of on the fence about how to rate this one. The broth is fantastic, but I wasn't a fan of the meatballs. For the soup I used roasted poblanos instead of the canned chiles, added chopped kale and some dried thyme and parsley. Even though I halved the recipe I still added the entire can of diced tomatoes and a few TBS of tomato paste instead of sauce. I did not change the meatballs except for using the entire egg even though I halved the recipe. They held together fine. Next time I will add black pepper, parmesan, oregano and a LOT more garlic to the meatballs. That should make me happy. I need to get in the habit of frying up a small sample of meatball/meatloaf mix to test for seasoning before completing a recipe. I had used 85/15 ground beef and that resulted in pretty oily broth. I'll use a much leaner ground meat next time. Also, I don't understand why the meatballs need to be completely cooked through all on their own in the broth before adding the veggies. Maybe it gives the meatballs more time to acquire the broth flavors? 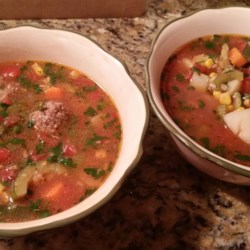