I thought this was pretty good, my husband thought it was ok, but would be better with spinach instead of zucchini, which I think would also work. I used a touch more cheese than called for, left out the olives, and had a combo of fresh and canned tomatoes mixed in. I had to cook it for a bit longer than it seemed like the directions indicated-- the timing wasn't exactly clear, but it turned out well. It was ok reheated in the oven the next day, but not as good. 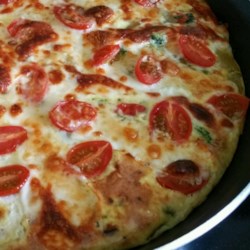