This is such a flavorful dish, you wouldn't know you were eating spinach! Rather than going to the extra effort of buying or making a pie crust, we just baked it in a shallow casserole dish. The only change I made, was using ricotta cheese rather than cottage. It's a little on the salty side, so, if watching your salt, cut back a bit on the poultry seasoning. I used the left overs the next day in an omlette and it was amazing! Will definately make again and again and again. This may replace the boring green bean casserole at Thanksgiving! 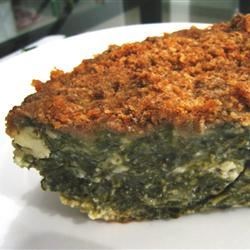