I made these for our traditionally non traditional xmas meal 2012 and they were the hit of the meal! I did not have the mushrooms it calls for, so I used regular button mushrooms and it worked out just fine. Other changes I made, due to materials and taste were: I do not buy bread crumbs, I use croutons crushed. This time they were a garlic cheese flavor. I skipped the hot sauce due to taste of guests not being as hot as our family's taste, but have no doubt it would be great with it in as well. I chopped up the mushroom stems and added them to the filling. Last, I cooked them for an additional 5 minuets under the broiler. FANTASTIC!!!!!!!! Don't half the recipe because what is left over (and there will be leftover) makes the most awesome dip ever. I put it out as an appetizer with ritz style crackers and green onions. It was eaten before, during, and after the meal by people who were already "stuffed" but just couldn't help themselves. This stuff is GREAT! UPDATE: For our traditionally non-traditional Thanksgiving meal 2014 I made these again and they were still just awesome! This time I used PANKO and have fallen in love with the stuff. Great to use anytime bread crumbs are called for. baby bella mushrooms were even better than the buttons too! I doubt real crab meat would improve this as it is a stuffing, but I always use imitation for this sort of thing. I would have given this 5 stars had I not made the small changes I did for personal taste. 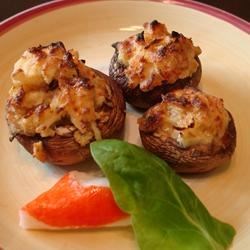