Good, solid, basic recipe for stuffed peppers that offers the freedom to tweak to your own liking. I could see this recipe in a basic and general reference-type cookbook. I did put my own spin on this as well. I used green, orange, yellow and red bell peppers, not just for color but for a milder, sweeter flavor. I cut them in half lengthwise, then blanched them for about three minutes before transfering them to an ice bath. I cooked the rice, but did NOT cook the meat - added an egg, chopped onion, minced garlic rather than the garlic and onion powders, fresh chopped parsley, oregano and thyme, as well as salt, pepper, a handful of grated Parmesan cheese, and tomato sauce I had put up from my garden. Poured more sauce over the peppers than called for, dotted with butter, then baked for about 45 minutes. Now it's a five star recipe in my book! 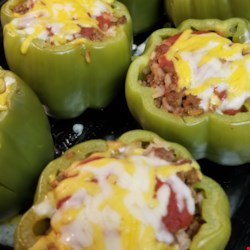