Skip to main content New<> this month
Corned Beef and Cabbage I
Reviews:

The recipe as written will work very well. I've been doing it that way for many years, except I cook the veggies separately in some of the broth. However, I thought I would try the crockpot method suggested by several reviewers.I also tried the new Reynolds crockpot liners. they work great! No clean up except the lid. I have a new Rival 5 quart slow cooker with removable stoneware crock. I had a 3.5 lb corned beef brisket(too fatty)and followed the Rival instructions which called for 1 cup of water, onions and cabbage only. I added 6 small potatoes and 3 carrots, cut in half. In 8 hours everything was overcooked, including the veggies! I could see the broth boiling around the inside of the crockpot, so I assume it gets too high when set on low. It's best omit all liquid as it is not needed when cooking roasts in the crockpot. Cooking the corned beef in the old fashioned way is the best. Skip the crockpot! 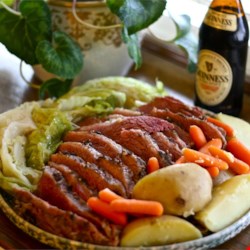 Corned Beef and Cabbage I