as written the recipe had a few problems.. the shortbread came out fine, but the apple spice part was really lacking. I used homemade apple butter which was very fresh and vibrant so that wasnt the issue. I tasted the dough before I baked it and I added a lot mere spices to it.. I used more cinnamon added more salt, nutmeg allspice and some ginger. The cookies came out with a nice taste but the apple was pretty faint. I made a glaze with some powdered sugar and apple butter.. that bumped the flavor up 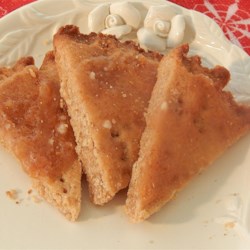