I used organic ground beef and organic roasted diced tomatoes. A packet of dry mix of Italian seasoning used to make Italian dressing was substituted for the seasoning. I began with half a packet and ended up adding the whole packet... good! I used a dash or two of Emeril's Kick It Up Sauce in place of cayenne pepper. Also added twice as much of diced tomatoes than called for as well as added about 1/2 cup of water. A half hour of cooking is plenty! Good recipe that I will make again but believe that the flavor of the ground beef I used contributed to the flavor as well as the Muir Glen roasted diced tomatoes. 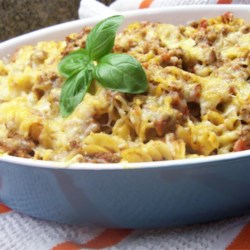