My dad is from Ireland, and I wanted to make him something special for his 71st b-day. He said it was a little different from what he remembers, but he did eat it. He said that there were different kinds of boxty, and that his mother would make it as one big patty in the pan, and then cut it up. He also said he remembers her boiling it. Thank you for allowing me to make my dad something to remind him of his youth!! 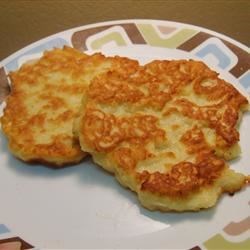