On taste, this recipe probably rated a three. I gave it an extra star for ease of preperation though. I took the left overs to my mother's house and she agreed the taste was good, not great, but was impressed when I told her how easy the dish was to make. I used cresent rolls rather than the crust the recipe calls for. My 16 month old daughter like it and ate a fair amount. I thought it was okay, a little bland and mostly what I could taste was the sauce. I used Paul Newman Marinara sauce for mine. I will probably keep the recipe in mind for those nights I need something really fast and easy. 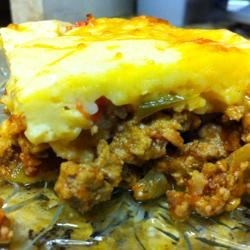