I've recently entered the world of pie making and this was my first pie crust ever (with my first apple pie - Grandma Ople's found in Allrecipes as well). I've heard so many horror stories and thought I'd just use the store bought ready made dough that you just lay in a pan and bake - it was good (enough) when I used it for my first pie (pecan). But my friend urged me to just try to roll out my own. And, I am no longer afraid! This was so easy to make and handle, and I am still shocked it came out so pretty (I posted a pic). I used butter flavor Crisco shortening as suggested and brushed the pie with lightly beaten egg before baking. Crust was super flaky, but sturdy enough. I am going to use this again and again - have plans for a pot pie dinner using this crust. (I do agree this recipe only makes enough for 1 double crust and 1 single crust pie. I'm making another pecan with the single crust I have left.) Anyone want the remaining ready-made pie crust I have in the freezer? :-) EDIT: I've now made 5 pies using this crust - and EVERYONE raves about this crust. I'm SO happy that I used this in my first attempts with pie crust because I don't need to keep trying recipes. Seriously, I'm not even a bread/crust person but i CRAVE this pie crust! A pie crust CAN totally make a pie! 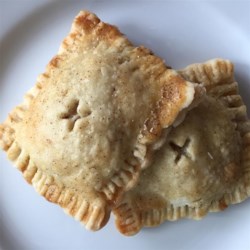