I made this with a few modifications and it was fantastic. The first modification is that I used vanilla bean Greek yogurt instead of the sour cream, and I also didn't have enough white sugar, so I used brown sugar in the cake part. I also added about 1/3 cup of water to the batter because it was too dry. I also used two bags of frozen rhubarb, rather than fresh. It turned out very well, and even the kids, who were skeptical at first, ended up loving it. Thanks for sharing the recipe! We'll definitely make it again. 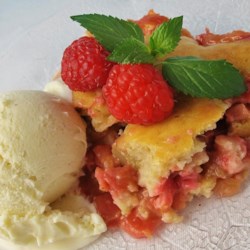