My aunt gave me some apples (more than I could eat before having them go bad) and found this recipe so I decided to try it. I dont have a canner so I used a big pot like I do when I make jelly. I only had 4 lbs of apples so I used the custom feature to scale this recipe down. I took other suggestions and used part brown sugar and increased the cinnamon and used pumpkin pie spice. *My question is...are the apples supposed to still be "crisp" when you open the jar? When I sampled the next day they were just as crisp and fresh tasting as they were when I filled the jars. I have only made canned jelly and not sure what the texture is supposed to be on this recipe. Nonetheless they do taste great! 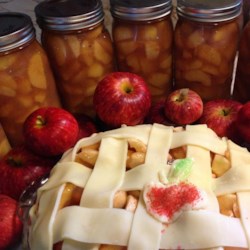