This cheesecake is AMAZING!!! I served it at my Christmas party and it VANISHED. Everyone was raving about it. First, I used all Neufchatel cheese (1/3 less fat). I baked it for 58 minutes on a cookie sheet in a springform pan. Instead of the crust suggested in the recipe, I baked a box of brownies for 30 minutes, then while hot I scooped the brownie out and pressed it into the bottom of the springform pan. Then I poured the cheesecake in and baked it as usual. After the cheesecake cooled, I mixed up a ganache (boil 1 cup half and half, remove from heat, add 8 ounces semi-sweet chocolate and 1 ounce bittersweet chocolate, wisk until smooth). I poured the ganache on top of the cheesecake and immediatly placed it back into the fridge for 30 minutes to cool. This was AMAZING. Thanks so much for the great recipe! 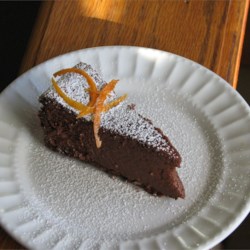