This is an exccellent banana bread recipe. Most recipes I've tried turn out being dry or rather "blah". I gave this recipe 5 stars (despite some substitutions I made) because of the moistness and great flavor. I used vanilla yogurt rather than butt4rmilk, 1/2 cup white sugar and 1/2 cup brown sugar, an extra 1/2 cup of mashed banana (I had 4 banans that were beginning to look like a scienc project), an extra 1/4 of flour, and a heaping 1 tsp of cinnamon. I'm not telling my mom, but this recipe is better than hers. I will definitely be making banana bread more often now!! 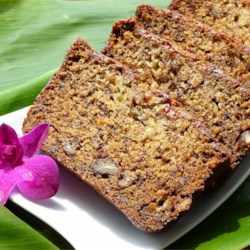