This was the best recipe for bread pudding! I've made it a few times and added extra goodies. I used 16 oz of french bread instead of 8. I found 8 to be a bit too soggy. I used twice as many pecans and added some rasins. I think I may cut back a bit on the Kaluah next time. I also reheated the leftovers in a toaster oven instead of the microwave. It kept the toping crisp. 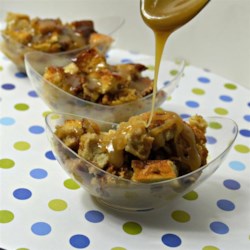