UPDATE PT II: My version equates 3 cups of cooked yams to the 5 yams of undetermined size/weight noted in the original recipe. UPDATE: I read some earlier reviews about the "sweetness" of this recipe. I normally pick out 5 of the largest yams I can find. Used garnet yams before and used Beauregard yams this last time. It came out the same. This nukes well and is easily pre-made. I had enough yams to fill 2 loaf pans almost to the rim, but it came out a little soft (like baby food). So, in this case, I would have added an extra egg to give it extra firmness. Last time it was was just enough to fill 2 loaf pans 3/4 full and 2 eggs gave it enough firmness. Splenda for the yams and brown-sugar splenda for the topping worked well. =================== I've been attempting various sweet potato dishes for the last few years from this site because other family members expect some sweet potato dish during Thanksgiving. They all came out similar to most sweet potato dishes we've tried in the past. Nothing made us go, "Hmmmmm....sweet potatoes?" I made two alterations to this recipe. I substituted Splenda for the white sugar and I nuked this dish instead of baking it in the oven (there wasn't room due to the turkey). It is the first time in my home that a dish of sweet potatoes was fought over. There was little left over and everyone wanted some to take home. Anyhow, this dish came out creamy (like good mashed potatoes consistency), wasn't overly sweet, and it turned 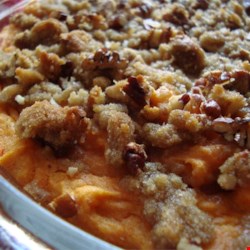