I have been looking for a great apple crisp recipe for ever! If I found one that was crispy, it had no cake-like middle. If I had cake, I had no crisp. You get the idea. This was both. I did alter the recipe. I used a spice cake mix instead of white, I omitted the brown sugar and added 2 packets of Quaker Instant Oatmeal Supreme cinnamon pecan cereal (make sure to get the supreme cereal only because of denser oats than regular)to the cake mix along with 1 tsp cinnamon. For the apples, I added 4 TBL caramel Ice cream topping blended with the 1 cup water and 1 egg. This was poured over the apples. I like the top really crispy so I put it under the broiler for a couple minutes. This was super easy and delicious! 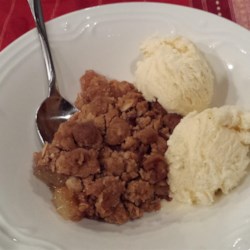