Followed directions exactly, well mostly but i only have splenda packets and used 2 of those, not sure if its 2 tbsp or not though. Well anyways this recipe was VERY VERY DELICIOUS! it was a little thin but i just added a coup;e more ice cubes and it was fine. next time i will add 1/2 a banana like some reviews said and omit the sweetener. i think i may have added a little more zucchini than called for but it still tasted really delish!...... word of advice; when drank awhile after it is made it doesn't taste quite as good since the flavors tend to separate....but it hardly last that long so no worries!EDIT!!! tried without sweetener and still very very good. Also tried with 1/2 frozen banana and freezed the zucchini, my favorite way was with freezing the ingredients since it came out much more refreshing and more smoothie like in consistency! overall it was wonderful and i recommend for every1 to try. 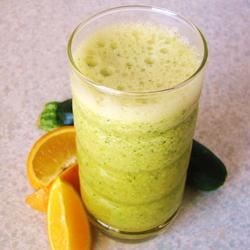